Current Issue
Sections
Archive Subscribe
Academics
Demystifying the Book of Judges
With funding from a 2016-17 Zylstra grant, Dr. David Beldman has published two books, and is writing a third, that unpack the book of Judges for postmodern Christians.
4 min. read
Beth Van Lingen
2017

This article was originally published by Lexham Press on February 27, 2017: blog.lexhampress.com

When Christians need inspiration and advice, when we are hunting for a richer understanding of our calling and mission, we usually turn to the tried-and-true, dog-eared and highlighted sections of our Bibles. We reread the Sermon on the Mount, we listen to a podcasted sermon on the Great Commission or we crack open the pages of a favourite author’s take on the New Testament letters.

The book of Judges doesn’t usually make that list. A little book between the stories of Joshua and of Ruth, Judges — with its accounts of violence, warfare and the badly behaved — might not seem an easy or comforting read. No less, the tottering first steps of the new nation of Israel seem far removed from the daily concerns of postmodern Christians. But, associate professor of religion and theology Dr. David Beldman contends, to flick quickly past Judges’ 21 chapters is to miss vital teaching from God’s word.

“When we look closer, we see that even the book of Judges acts as a mirror, showing us aspects of our lives and culture that we often overlook.”

“When we look closer,” Beldman says, “we see that even the book of Judges acts as a mirror, showing us aspects of our lives and culture that we often overlook.” Beldman traced the tragedies and triumphs of the young Israelite nation, unearthing a challenging and neglected biblical book. With funding from a 2016-17 Zylstra grant, he has translated this work for students, congregations and pastors with Deserting the King: The Book of Judges, the latest instalment in Lexham Press’ Transformative Word series, which is edited by Dr. Craig Bartholomew. For biblical studies scholars, Beldman has written The Completion of Judges: Strategies of Ending in Judges 17-21 (Eisenbrauns), a soon-to-be published look at sometimes bizarre stories recorded in Judges 17-21. Beldman is continuing his work on Judges with a commentary to be published in 2018.

Judges is a tragedy, and a prophetic warning. The book narrates the experiences of a people, redeemed and entrusted with a holy calling, who continually fail to live up to the expectations of their divine king. The Israelites had conquered Canaan with Joshua, and the Israelite tribes made the promised land their home. But what kind of nation would the tribes become? And how would they keep up with the Canaanites at their borders? 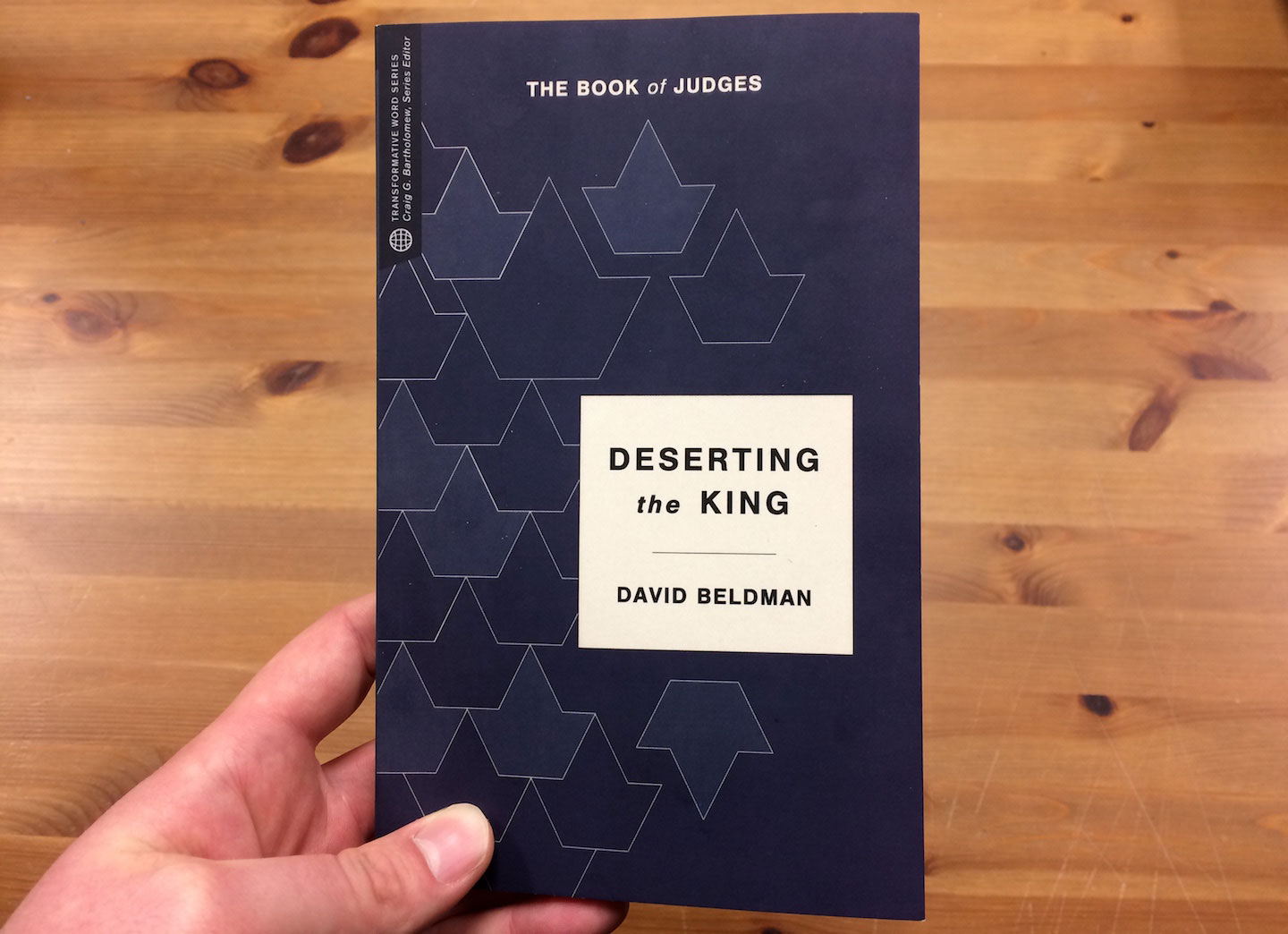 In the ancient Near East, it was thought that success in a new neighbourhood was assured by identifying local deities and their rites of worship. Canaan’s gods would then provide children, crops and good weather — all keys elements of success for 12 tribes seeking to become one nation. But the Israelites had already made a covenant with their divine king. Yahweh had defeated Pharaoh, freeing his people Israel from their oppressive usurper. Claiming the people he’d redeemed as his own, Yahweh gave the Israelites a new identity: they were to be a holy nation and a kingdom of priests. They were set apart from the nations for the sake of blessing these peoples.

In Judges, we see the Israelites begin to use the Canaanites’ sacred order — their moral, spiritual and social values — to shape Israel’s social order. “The challenge Judges presents to us is that Yahweh’s kingship extends to all dimensions of Israelite society — from family relations to international relations, from hospitality to politics,” Beldman continues. “In Judges, Israel’s faith commitments affected not only their spiritual and moral realms but their social structures, family life, method of nation building and approach to justice and governance.”

Postmodern Christians, too, are called to engage in culture-making in such a way that God’s order for the world is worked out in every dimension of our lives. “The way that humans create, approach and develop things like music, urban planning, business and agriculture,” Beldman writes, “is based on their notion of what the world is like, how it holds together, the purpose of human existence, the character (including the existence) of God and so on.”

Like the Israelites as they took on familiar, local customs and unwittingly abandoned the covenant with their divine king, we at times can be too close to our culture’s idols to perceive their dangers. Have we, seeking success and distinction among our neighbours, invested in a sacred order not our own? “When we split our allegiance this way, we effectively desert our divine King with devastating results — not only for ourselves,” Beldman says, “but also for our communities and the larger culture that we are called to bless. Judges is a sobering warning, just as relevant today as it was for its original hearers.” Judges warns us, as it did the Israelites, that only when we are deeply rooted in our king’s sacred order can we live out our calling to create and develop culture while we are immersed in the culture that surrounds us.