The senseless deaths of George Floyd, Ahmaud Arbery and Breonna Taylor earlier this year sparked a strong and continuous outcry about injustice, violence and anti-Black racism that stubbornly persists in society.

Rev. Dr. Esau McCaulley knows this struggle well, having grown up in the southern U.S. His new book, Reading While Black: African American Biblical Interpretation as an Exercise in Hope, explains that the practice of Bible reading and ecclesial interpretation is a key tool in the fight for hope and justice.

“The incarnation, life, death, resurrection and ascension of Christ stand at the centre of all my hopes. Hope is not in this passage or that one. The whole of the Bible is bursting with possibility.”

“This type of interpretation has provided hope because when the enslaved Black and Brown people turned to these texts they discovered in them a God who is a friend and not an enemy,” says McCaulley. “The incarnation, life, death, resurrection and ascension of Christ stand at the centre of all my hopes. Hope is not in this passage or that one. The whole of the Bible is bursting with possibility.” 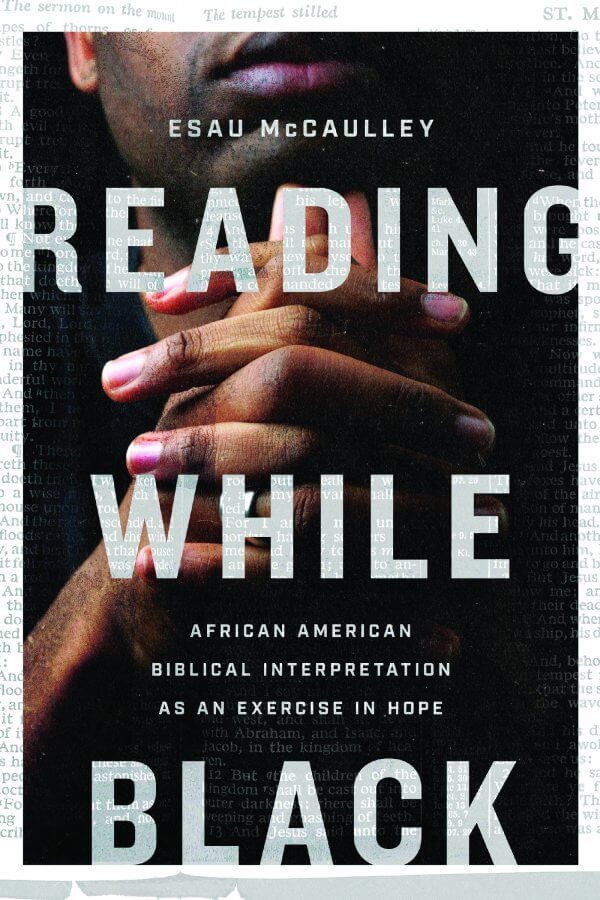 McCaulley is the winner of the 2020 Emerging Public Intellectual Award. The award, hosted by Redeemer University and sponsored by Acton Institute, Cardus, the Center for Public Justice, the Council for Christian Colleges and Universities (CCCU) and Henry Institute, is intended to recognize and foster emerging talent, those working in the Christian academy who excel in both academic and public spheres and whose work impacts the common good.

His first book, Sharing in the Son’s Inheritance: Davidic Messianism and Paul’s Worldwide Interpretation of the Abrahamic Land Promise in Galatians, published in 2019, explores the link between Paul’s belief that Jesus is Israel’s Messiah, and his interpretation of the Abrahamic Land Promise in Galatians. McCaulley completed his doctoral studies at the University of St Andrews where he studied under the direction of N.T. Wright. He currently serves as assistant professor of New Testament at Wheaton College, where his work and public voice have earned him the role of contributing opinion writer for The New York Times.

“His work is profound and important, provocative, accessible and of the moment,” says Dr. Stan Rosenberg, vice president for research and scholarship at the CCCU. “He not only challenges his readers to think critically and carefully, he asks the challenging questions in a manner that urges you to think and act together with him and the broader community. His work inspires us to seriously engage ‘Black ecclesial interpretation’ and in doing so reach toward a better Biblical hermeneutic sensitive to a greater depth and variety of cultural manifestations. We can then more honestly and adequately worship and read about the work of God that crosses cultures, deeply incarnates each in particular ways, and builds a bigger picture of God wherein each culture’s insights complement the others.”

McCaulley aims to point out that everyone comes to Scripture with different life experiences and cultural perspectives. “Black Biblical interpretation simply puts a name to a common reality that we are all shaped by our experiences and we bring those experiences to the process of interpretation,” he says. “This does not mean that the text changes in meaning depending on your ethnicity or race. That would be a strange idea! But it does mean that I might have some insights because I came to the text asking a particular set of questions that others might not ask because they didn’t have those experiences. That is also true going the other way. Other cultures might be able to point out my blind spots. The goal is that together we might discern what God would have us do.”

This academic year, Redeemer will facilitate discussion groups amongst students, faculty and staff about McCaulley’s book and promote book clubs to the larger church community. “We’re looking forward to engaging in conversations about race and diversity from a Reformed Christian perspective and we’re excited to be able to use this book as a starting point for discussion,” says Dr. David Zietsma, provost and vice president, academic. “It provides a much-needed Black perspective at this time in history.” Redeemer also plans to host McCaulley for on-campus speaking events when pandemic restrictions allow.

“I hope that people can see that the Scriptures, the church, and most importantly God himself has something to say about every arena of thought and action.”

Though McCaulley says his entry into the public square through speaking and writing has been unexpected, he wants people to know that anyone wondering about the church’s message in this moment could benefit from his book. “Although it is focused on the particular questions being raised by the African American community, it is not a book closed off from the rest of the church and the world.”

“I hope that my writing and speaking models a combination of rigorous theological reflection, careful biblical interpretation, and a realistic analysis of the present moment,” McCaulley says. “I hope that people can see that the Scriptures, the church, and most importantly God himself has something to say about every arena of thought and action.”