The following is a transcript of president Dr. Robert Graham’s 2018 opening convocation address to the institution. As such, it is written in a conversational tone.

Good morning. To our new students, welcome! To our faculty, staff and returning students, welcome back! We are glad that you are here. This is our first opening convocation with me as president, and I am so delighted and honoured to be here. Consistent with the Redeemer University College theme for this year, we can all say, as did Moses in response to God’s call, “Here I am.” This is taken from the Exodus 3:4 account of God calling Moses. God calls others throughout the Old and New Testaments. While each calling is unique, there are some shared aspects. This morning I want to speak briefly about calling, and to challenge us to think about our place here at Redeemer and our response to God’s calling, both individually and collectively.

Let me talk about three aspects to calling that may be familiar to you.

You’ve likely heard the story of Samuel before. While I won’t read the entire scriptural reference again, let me share some key aspects of this passage with you. There are times when God, in his providence, changes our course. He directs our steps. He speaks to us through his Holy Spirit. He calls us, and he uses others to confirm that call. in the absence of a specific call, God has given us good work to do.

We find Samuel being obedient and doing good work. Verse 1 tells us, “…Samuel was ministering to the Lord under Eli.” He was doing the work that was before him even when, according to verse 7, “Samuel did not yet know the Lord, and the work of the Lord had not yet been revealed to him.” I take this last sentence to mean that he had not heard specifically from the Lord.

Another person here is Eli. Even though God was not speaking to Eli here, Eli was wise and sensitive to God and was able to provide sound counsel to Samuel. Eli recognized that God was speaking to Samuel, and Eli’s direction allowed Samuel to hear. When Samuel did hear, he was obedient to Eli’s direction and gave the proper response, “Speak, for your servant is listening.”

The story of Samuel is made even more significant when we understand the story of Hannah, his mother, and even more so when we later read about Samuel’s role in the life of David. Perhaps you identify with Samuel today and are unaware of a specific call upon your life. You can still do the good work that is before you and do it as service unto the Lord. Faculty and staff members may identify more with Eli, where you may be able to help students and even one another discern God’s work in each life. You may even identify with both Eli and Samuel, where you are simultaneously listening for God’s direction for your life, while also helping those around you in prayer, fellowship and encouragement.

In the new covenant, God’s Spirit speaks to us as we pray, reflect, meditate, but also through the communion of believers. Redeemer can be a critical part where God will by his Spirit, speak to you through your peers, through faculty and staff members, in the classroom, and in community engagement.

We should always be receptive to the Holy Spirit’s direction. Recognize that the Lord is sovereign, and he chooses to intervene in our lives according to His will. 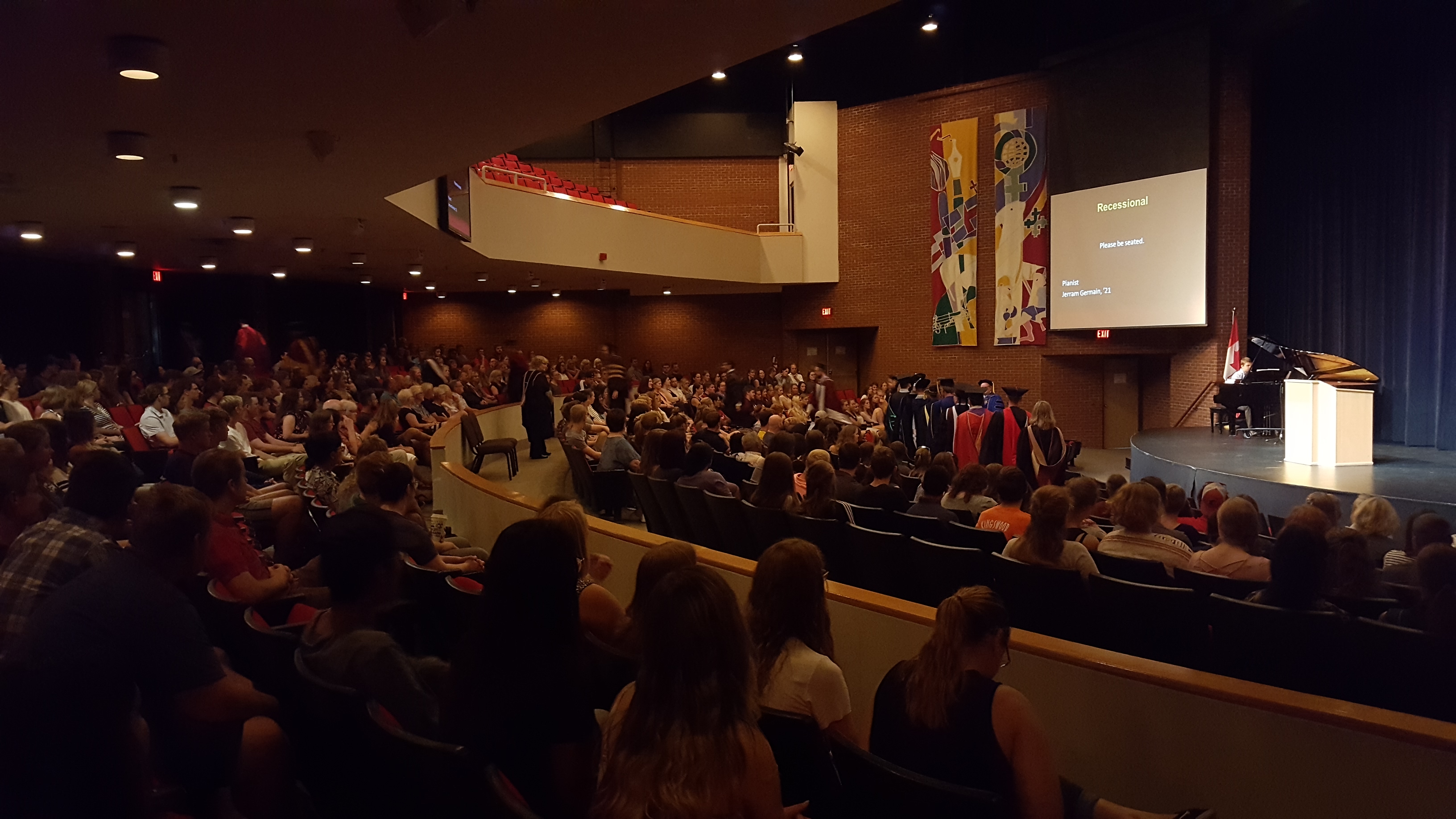 Let me share my story. I grew up in a Christian home. My father served as a missionary and pastor for about 50 years and my mother served alongside him. My parents instructed me in the Word and encouraged me to earnestly seek God’s direction for my life. I had a sense that God was calling me to something, but I didn’t know what. I prayed diligently, asking God to lead me. Having seen my father’s work as a pastor, I felt certain that God was NOT calling me to pastor a church. But what else could it be?

At that point in my life, perhaps because of the Christian tradition in which I was raised, or because of my misunderstanding, I thought that if God CALLED someone, it was to be a pastor, a missionary, or perhaps a youth or worship leader. As I understood the world at that time, there were clearly sacred things (including churches, the Bible, things holding religious significance, and even certain vocations) and secular things (everything else). I wondered which of these specific “sacred” vocations God wanted me to pursue. What was he calling me to do?

Despite my sincere faith and prayers to God, he did not speak to me as he did to Samuel. The desire that God placed in my heart was still there, but I didn’t know what to do next. During high school, I took courses in electronics and electrical systems. The day after I graduated, at age 17, I moved to Savannah, GA to start working for an electrical contractor. After a long, hot summer of hard work, I was very receptive to the invitation from my parents to attend university. I applied to a small Christian liberal arts university and began my studies in the fall of 1982. Coincidentally, that was the same year that Redeemer University College opened its doors to begin educating students.

Still uncertain of where God was calling me, I decided to pursue a major in Christian Education, thinking that this would prepare me for a range of non-pastoral Christian ministries until I could discern God’s direction for my life. I completed my first year, but given my understanding of calling, I didn’t feel that I was on the right track. Nothing was resonating with me.

At the beginning of my second year of university, I had a great sense of unease and uncertainty. I was struggling trying to reconcile my sense of God’s call on my life and my narrow understanding of calling. I was seriously contemplating going back to electrical work, but I had this sense that to do so would mean abandoning God’s call on my life. It was a faith crisis for me.

God graciously intervened at exactly the right time in the form of a man named Al. Al was a longtime family friend who invited me to have lunch with him at Cracker Barrel, a nearby restaurant. He bought me a chicken sandwich and encouraged me to talk about my dilemma. After I shared with him, he said, “Bob, God can call you to be an electrician just as much as he can call you to be a pastor. The world needs Christian electricians too.” It was like scales fell from my eyes! That conversation completely changed my perspective and forever altered the course of my life. Al was not the only person who influenced me. There have been so many over the years. Looking back, I can see the hand of God at work through each of these people, and at every step of the way, to prepare me for where he has brought me and what he wants me to do.

Now, for many who were raised in the Reformed Christian tradition, and certainly for those who have learned about the Reformed Christian worldview in your studies at Redeemer, this would be no major revelation because you already understand that God calls us into all spheres of human endeavour. There is no sacred/secular divide, as I once thought, with some vocations being sacred and the rest being secular. As Abraham Kuyper said, “Oh, no single piece of our mental world is to be hermetically sealed off from the rest, and there is not a square inch in the whole domain of our human existence over which Christ, who is Sovereign over all, does not cry: ‘Mine!'” (Bratt, 1998) Now I understand and believe this; it just took me a while to get there.

Romans 8:28 (NIV) tells us that, “…we know that in all things God works for the good of those who love him, who have been called according to his purpose.” How can we be sensitive to God’s call, and be the person who helps other discover or realize their callings? We may be in positions to recognize the gifts that God has given to those around us, to encourage them, to strengthen them.

God, by his Holy Spirit, breathed the vision for building Redeemer University College more than 35 years ago, and confirmed that calling and vision by inspiring faithful individuals and churches to come alongside. Now we all have the privilege to be here.

Together, we must honour the calling that God gave the founders of Redeemer University College to establish this place where lives are changed, minds are developed, and hearts are shaped and emboldened to serve God. In every realm of human endeavour, and in every place where God leads us, we are to be God’s hands extended to a fallen world so desperately in need of redemption. As our graduates go forth, they should, in the words of Jeremiah 29:7, “…seek the peace and prosperity of the city to which I have carried you into exile. Pray to the LORD for it, because if it prospers, you too will prosper.” NIV

God alone, who is sovereign over all, knows what challenges and opportunities lie before us individually and collectively at Redeemer this year. He has been preparing us already. Let us earnestly endeavour to be mindful of the calling that God places in our hearts. If you have not yet sensed that calling, do not despair. Remember from our scripture reference, before Samuel heard a specific word from the Lord, he “…was ministering to the Lord under Eli.” Let us be sensitive to the leading of the Holy Spirit, and as Eli instructed Samuel, this year let each of us at Redeemer say, “Speak, Lord, for your servant is listening.”

May God bless you and bless Redeemer University College. Thank you.