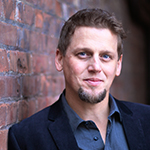 The novel tells the story of a woman from downtown Hamilton looking back on her magical and tumultuous fifteenth summer, the summer that changed everything for her small family.

Everyone is invited to help celebrate the novel’s release at a number of local events:

Brent will read from his new novel, Saints, Unexpected, as part of a panel discussion with writers who write about Hamilton, the gritty city.

This panel discussion is part of gritLIT, Hamilton’s literary festival. gritLIT, a four-day celebration of Canadian authors, runs from April 7 to 10. Learn more at gritlit.ca.

Bryan Prince Bookseller will host an evening with Brent to celebrate the release of his novel.

For more details about the book and his writing, visit brentvanstaalduinen.com. More events and updates will be added to the website as the launch date draws near, but the best way to stay informed is to follow him on Twitter, @brentvans, and like his Facebook page.

Academics
Where is Jesus?
Dr. KJ Drake set out to explore the historical debate of the nature of Jesus in his recently published book.
Shannon McBride
Academics
Listening Through the Cross
Associate professor of art Phil Irish is participating in a reimagined Lenten tradition.
Amelia Foster
Academics
History with Intention
The history program offers students a unique balance of strategic courses.
Shannon McBride