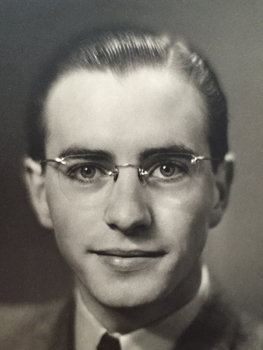 The leadership, faith and courage of Rev. Henry De Bolster, Redeemer’s founding president, have shaped our community from its inception. We are deeply saddened by Rev. De Bolster’s passing last April. Redeemer students, faculty, staff and many others gathered to pay tribute to Rev. De Bolster in a memorial service that month. “His vision and tireless, faithful efforts were vital to Redeemer’s establishment, and his presence with students, faculty, staff and Redeemer’s support community meant that he touched many lives,” says President Hubert Krygsman.

Even before Redeemer opened its doors to students, Rev. De Bolster was appointed president. Named president in 1981, he guided the nascent institution through the challenging early days of its existence. Emeritus professor of religion Al Wolters, then an OCCA board member, had the honour of telling De Bolster he’d been chosen for the presidency. Wolters remembers Rev. De Bolster as a “a man of strong faith, firmly rooted in the Reformed faith of his Dutch forebears, but also forward-looking and willing quite boldly to ‘step out in faith’ into an unknown future.” Working with the board, De Bolster was tasked with assembling a faculty, attracting students, finding a campus and raising the support necessary to begin this wildly ambitious endeavour of faith. “Henry was a rock-solid and uncompromising supporter of Christian education on all levels,” says Wolters, who joined Redeemer’s faculty in 1984. “The movement for Christian education has never had a stronger and more convicted advocate than he.” Through God’s blessing and faithfulness, Rev. De Bolster oversaw the opening of Redeemer in September 1982 with 97 students, eight faculty and rented facilities.

Through the next 12 years of his presidency, he was present for many other firsts, including the acquisition and building of the current Ancaster campus. When he retired in 1994, Redeemer was home to more than 400 students and it had developed a well-regarded reputation for the quality of its academic program. For his work in establishing Redeemer, McMaster Divinity College awarded him an honorary doctorate degree. “It’s really hard to overestimate Henry’s influence on Christian education in Canada,” says Justin Cooper, who served as Redeemer’s president following Rev. De Bolster’s retirement. “He was courageous and visionary in each part of the process of establishing a Christian college in Ontario.”

Rev. De Bolster said that being the first president of Redeemer University College had an immeasurable impact on his life. It was during these years that he felt he fully lived out his calling. Christian education was his passion and he felt he had this very undeserved privilege to be part of “that important Kingdom work.” He tended to and loved Redeemer with his entire being.

“He was courageous and visionary in each part of the process of establishing a Christian college in Ontario.”

After his retirement, he returned to the ministry, serving churches in the Hamilton area as a guest preacher and visiting pastor. In addition to these engagements, he wrote two books: Stepping Forward in Faith, which details his experience founding Redeemer College, and Struggles and Blessings, an autobiography. He frequently returned to Redeemer as a guest speaker.

Rev. De Bolster’s influence continues to be felt by Redeemer students and almost 5,000 alumni. His legacy will continue to shape generations of students to come, from his vision for Christian learning to the campus on Garner Road to the scholarship endowed in his name.