Luke McKee ’14 most recently worked for World Vision as an editor and videographer, but he first began working in communications at a smaller non-profit organization. “In 2015, during the Syrian refugee crisis, I travelled with a team to Nepal. I’m afraid of flying. I was really skittish, but I just had to rip the bandaid off and go, or else I would have missed the opportunity.” 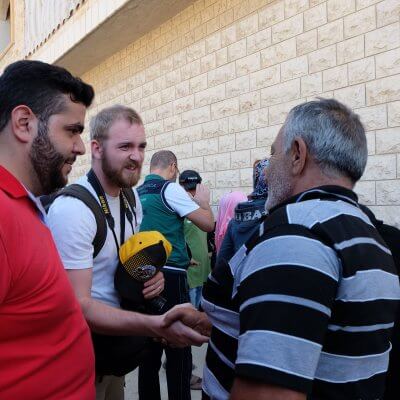 Since then, McKee’s frequent flyer miles increased as his work took him to the skies and across the world to tell the stories of those who would not otherwise have a voice. In a World Vision project called 1000 Day Journey, documenting the experience of a woman named Mie Mie in Myanmar over a five-year period of motherhood was especially challenging and rewarding. The team watched, interviewed and conversed with her through many stages of motherhood from miscarrying to the birth of her second child. “It was a rewarding project to work on to see the progression in person. We saw their access to nutrition and education change, and we also saw her husband become more helpful. He had gone from unsupportive to attentive. It was so worthwhile.”

McKee also worked with World Vision on a new project called Chosen, which flipped the script on their child sponsorship program. Members of Soul Sanctuary, a church in Winnipeg, MB, took pictures of themselves to send to Kenya for the child to pick which family would sponsor them. McKee was there in Winnipeg to film the process and then immediately flew with a crew to Taveta, Kenya to let the child pick the family that would sponsor her or him.

“We finished videoing in the Winnipeg church. The envelopes were opened on their church stage to see who chose them. There were definitely tears. It was amazing. And professionally, it was an accomplishment in building end-to-end video. I’m really proud to have been a part of it,” says McKee. Production of the Chosen project is on hold now because of the coronavirus pandemic.

McKee credits his time at Redeemer for equipping him with the well-rounded perspective he brings to his work. “The holistic education I received at Redeemer was crucial. From a critical-thinking perspective, it prepared me to be a better storyteller.”

“The holistic education I received at Redeemer was crucial. From a critical-thinking perspective, it prepared me to be a better storyteller.”

Since COVID-19 spread around the globe, flying is no longer in McKee’s immediate plans. “Before coronavirus, we were pushing towards using local people from the places World Vision was working in. It will be more cost effective. Plus, the end product will be better because the people on camera will be talking in their own language as they interview subjects. Coronavirus has just sped that up.”

Unfortunately, the reality of the pandemic also resulted in McKee leaving his position at World Vision in August 2020. However, he plans to keep moving forward and apply his well-honed storytelling skills to freelance work.

“The storytelling craft I was able to develop at World Vision is something I continue to use to this day across all freelance projects. Whether it’s a corporate promotional video or short documentary on food scarcity in Canada, there’s always a story of connection and emotion that can be discovered and shared on screen.”

Foundations
Leaning in to Learn. Forward.
A closer look at how Redeemer’s 2025 Strategic Plan is moving the institution forward by strengthening its roots and investing in student and graduate success.
Shannon McBride
Foundations
Faithful Through Transitions
An update from Redeemer’s Interim President.
David Zietsma