“The Mush Hole was the residential school’s nickname,” reads an art piece’s abstract in the art gallery of the Woodland Cultural Centre. The moniker references the mushy oatmeal frequently served to Indigenous students for meals up until the residential school closed in 1970. Today, the school sits just outside the doors of the gallery and museum, and looks, to the uninformed observer, like a veritable mansion on the outside. However, a different story is told through guided tours of the school and museum and through Walking Together, an art exhibit resulting from the collaboration between survivors of the Mohawk Institute Residential School and 11 First Nations high school students in Brantford.

The two-hour long guided journey through the Woodland Cultural Centre Museum gave 20 different members of the Redeemer community — staff, faculty, students and their families — the opportunity to learn more about a much different culture. The museum tour, led by Father Norman Casey of Oshweken’s Anglican Parish of the Six Nations, was just one part of a much larger day-long cross-cultural experience for the group, including stops at Her Majesty’s Royal Chapel of the Mohawks, the oldest surviving Protestant church in Ontario; Iroqrafts, a traditional Indigenous crafts store on the Six Nations reserve and the Pauline Johnson Homestead at Chiefswood National Historic Site.

“I realized how little I know and how much there is to learn.”

The day-long Six Nations tour, held at the start of March, concluded a term’s worth of participatory events intended to raise campus awareness of Indigenous issues in Canada. From mid-January to mid-February, the campus read the book Wrongs to Rights: How Churches can Engage the United Nations Declaration on the Rights of Indigenous Peoples. The community also learned from speakers like Sara Anderson, of KAIROS Canada, and Mark MacDonald, the national Indigenous Bishop for the Anglican Church of Canada.

“I realized how little I know and how much there is to learn,” reflects fifth-year psychology student Shannon Vanderveen. Shannon’s words likely resonate with many of the other tour participants who observed Walking Together. The exhibit’s goal is to increase awareness of not only First Nations history, but the history of all of Canada as well. Most remained quiet and adopted a posture of respect while observing the poignant and disturbing artwork on display, which references the pain and abuse suffered by the residential school’s former students.

For Dr. Terry Loerts, assistant professor of education, the Six Nations Tour was eye-opening. “The multi-sensory experience of touring historical sites, listening to stories, and viewing artefacts helped me understand a little more of what it means to be Canadian,” she says.

She was particularly struck by the artefacts and artwork created by the people who were assimilated into the residential school system. Students who attended the schools were typically given a number as an identifier, instead of their first name. “I saw ‘My mom was number 36’ written on a small piece of paper,” she continues. “I was shocked by how people were stripped of their humanity by being assigned a number.”

“I was shocked by how people were stripped of their humanity by being assigned a number.”

Julie, the woman who showed our group around the Mohawk Chapel, spoke about how her grandfather, a survivor of the residential school system, ran away five times from the school. Each time he was caught, or returned to school due to hunger, he was given a new number. Years later, he still signed legal documents with his number as opposed to his given names. He spoke five traditional Indigenous languages, including Mohawk, but rather than passing down these languages to his children and grandchildren, he refused to in order to prevent the trauma he experienced at school from being experienced by future generations.

“Because it is the season of Lent, I couldn’t help but think of how Christ’s humanity and his deity were questioned, scorned and denied before his crucifixion,” says Terry. “Combining the cultural tour with what Christ’s death means to me makes me want to move away from just being empathetic and identifying with the experiences, to being compassionate — wanting to do something while still feeling empathetic.”

“I learned that truth and reconciliation begins with silence,” says Shannon. “The greatest gift I can give is my attention. If I can create a space of hospitality, where Indigenous Canadians can share their stories and have their voices heard, I am opening the door to transformation.”

A Christian Vision for Reconciliation

“A highlight of the tour was going to the Mohawk chapel,” says third year applied social sciences student Monika Couperus. “It was very beautiful and full of history. What really intrigued me was having two different cultures united in one faith. Two different languages; one song of worship to one God.” 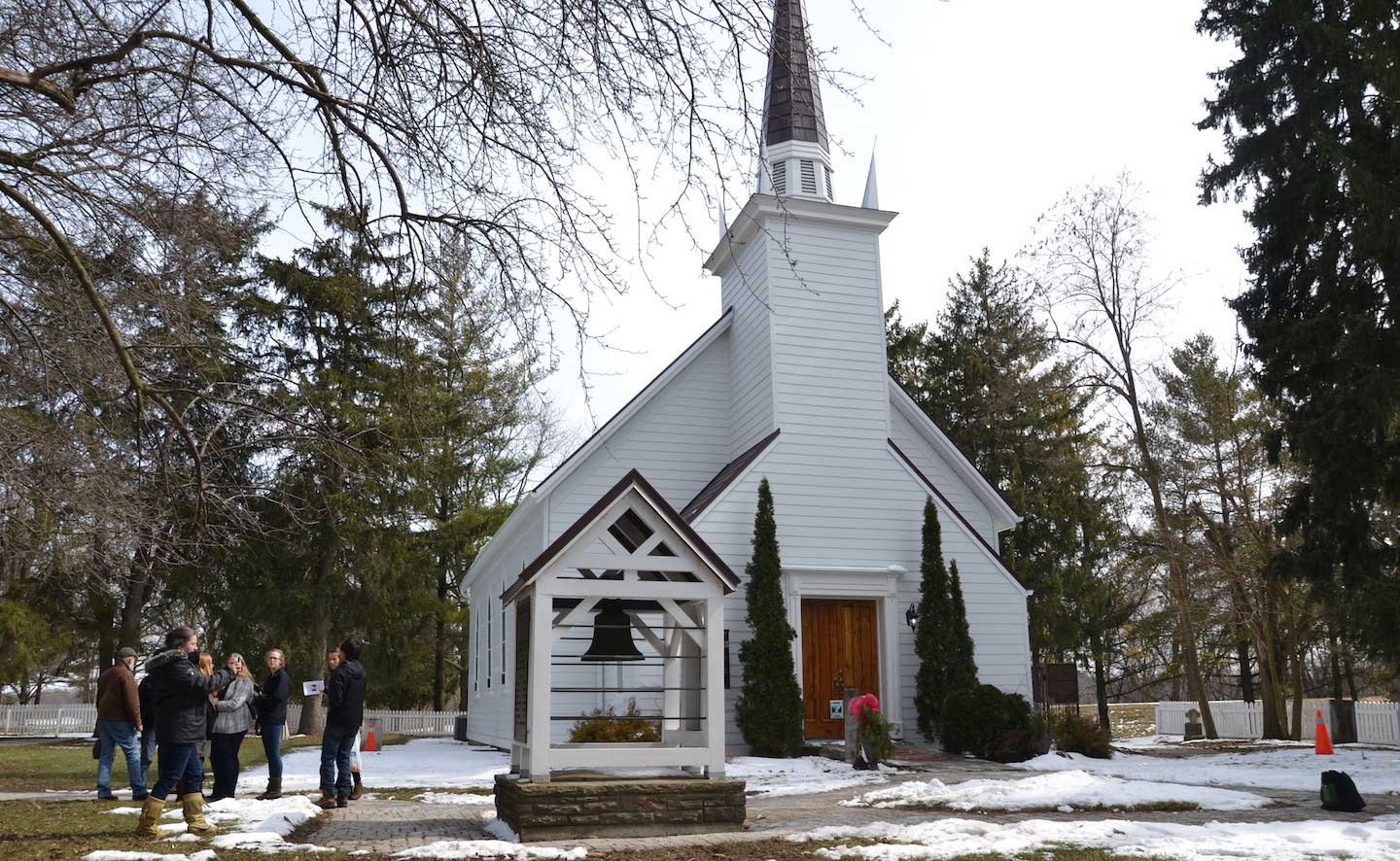 In the midst of a hectic day, just after finishing lunch in the Mohawk Chapel, Father Norm handed out small booklets with an order of service to each person. Sitting in some of the oldest church pews in Canada, among beautiful stained glass windows, we began to sing “Amazing Grace” in the Mohawk language. After, we prayed an excerpt from an English translation of the Book of Common Prayer in Mohawk. Partaking in a shared liturgy felt appropriate — time cannot be rewound and mistakes cannot be undone in the shared history of Indigenous people and Western settlers. To listen and to learn across cultural boundaries are gestures and stops along the journey of reconciliation.

“Reconciliation will begin when we put our agenda aside and listen,” continues Shannon. “Rather than let the truth make me feel ashamed or defensive, I want the truth to challenge me.”

In the Mohawk language, R’s become L’s, T’s become D’s and K’s become G’s. Our group’s awkward acapella rendition is perhaps the best image to use to describe the transformative qualities of cross-cultural learning: clumsy yet gracious; uncomfortable yet crucial.