Rachel Brouwer’s calling to make a difference in the world began to take shape while she was a student at Redeemer. “I learned that all work has the capacity to be Kingdom work – including working in dark places of violence or oppression,” she says.

After hearing Christian activist Shane Claiborne speak at the Jubilee Conference in Pittsburgh, she was compelled to consider how social justice might fit into God’s calling on her life. “Like Shane, I began wondering why I was working so hard to be the first when Jesus says that the last will be first,” she says. “I began to wonder what it would look like if I believed that Jesus actually meant what he said.”

At a social justice weekend that was hosted at Redeemer, she learned about the work of International Justice Mission (IJM) and was moved by their vision to bring rescue and restoration to those who are enslaved. Issues of fairness, equality and justice had always been things she cared deeply about and the fact that there were Christians all over the world working to combat these dark places was inspiring to her.

Rachel applied for an internship at IJM the summer after she graduated. When the internship ended, she was hired full time. She has filled a number of different roles in her 10 years at IJM, and currently works in development managing a team of people who plan and execute fundraising gala events and campaigns, and provide support to IJM directors of development.

Seeing lives and systems transformed so that those who live in poverty are protected from the violence of slavery, sex trafficking and exploitation is rewarding for Brouwer. “I’m inspired by women like Thaiyamma, whom IJM helped to rescue from a wood cutting facility in India,” she says. Thaiyamma, her husband and daughter were trapped by a cruel and ruthless slave owner after accepting a small loan to pay for a medical expense for her daughter. When Thaiyamma realized she was pregnant, she felt hopeless knowing that the new life she carried in her would be born into a life of brutal labour and abuse.

Three years after their enslavement, IJM and local authorities were able to rescue Thaiyamma, her family and 12 others. Thaiyamma’s baby boy, Bablu, was born shortly after their rescue and he’ll grow up only knowing a life of freedom.

“God is a God of justice – who knows, sees, hears and responds to the cries of the oppressed and who lovingly grants his children the ‘dignity of causality’ by inviting us into this work with him.”

Today, Thaiyamma and her husband are business owners who employ others who have been rescued from slavery. They treat their workers with the dignity and respect they deserve.

“Transformed people transform people,” says Brouwer. “This is the beautiful work of the gospel.”

Closer to home, one of the most rewarding things about Brouwer’s job is encountering IJM donors and supporters who are so inspired by IJM’s work that they take what they have – money, skills or influence – and find a way to use it to bring change. “The creativity and generosity of Canadians is so beautiful and encouraging,” she says. 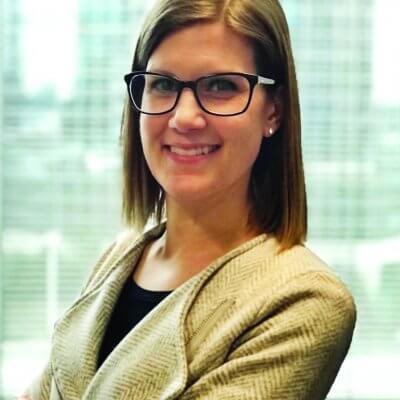 At the same time, in her work at IJM, she sees Christians struggle with the relationship between justice and the gospel. “Gospel and justice were never intended to be separated or seen as competing ideas. They were inseparable in the ministry that Jesus was announcing to a world that was groaning under the weight of brokenness and sin,” says Brouwer. Helping the church to reframe and broaden its definition of “gospel” has been a challenge for Brouwer at times, but she says it has also been incredible to see over her years at IJM how God is moving among his people to ignite – or reignite – a passion for justice.

“God is a God of justice – who knows, sees, hears and responds to the cries of the oppressed and who lovingly grants his children the ‘dignity of causality’ (Blaise Pascal) by inviting us into this work with him,” she says. “And not only does God delegate this work to us, he delights in our desire to work alongside him!”