This story was originally published in The Crown, Redeemer’s student newspaper, and has been republished with permission.

In a recent interview, Redeemer’s new president Dr. Robert Graham shared his earliest memory. Dr. Graham was born in the Bahamas and lived there for the first few years of his life. He remembers climbing a cinderblock wall in the front yard to chase the family cat. People driving by, disturbed to see a toddler running on a cinderblock wall, would pull over and return him to his mother inside the house. As soon as they left, he would head back outside.

This persistence has characterized much of Dr. Graham’s education and career. After two years studying as an education major at Lee University in Cleveland, Tennessee, he took three years off of school to work. He returned to school but didn’t yet have a sense of God’s calling for him.

While looking through Lee’s academic handbook, he read course descriptions from the sociology department. “It just resonated with me,” he said. He realized that he didn’t need to abandon religious training but “bring it alongside. Like the Book of James says, we’re called to minister to the whole person.”

He began taking sociology courses. One of his professors, Dr. Mundy, asked him to be a teaching assistant. “I was honoured,” Dr. Graham said, “but I was also terrified.” Mundy encouraged Graham to apply to graduate school. Graham applied to Miami University and completed a master’s degree in gerontological studies. Another professor encouraged him to get his doctorate and so he headed to the University of Cincinnati.

“No matter what area or field God has called you into,” Graham believes, “you can find ways to serve others.”

While at the University of Cincinnati, he worked as a researcher, exploring issues of public policy. He also worked as a programmer and analyst for a software development company and then as a researcher in a family medicine program. With Dr. Mundy’s encouragement, Graham went on to take a teaching position at Lee.

Dr. Graham’s own education and career had been powerfully influenced by his professors. “If I could be a prof and give back what had been given to me,” he said, “that would be the highest thing I could imagine and the most useful thing I could do.”

While at Lee, he pondered how the school could continue to share its strengths in spirituality while adding a focus on service. In his intro to sociology classes, he began to require students to complete a service project. He listed service opportunities on a website he created and soon other professors were using the website and creating similar requirements in their courses.

The idea caught hold and Lee University soon established a centre for service learning, of which Graham became director. Multiple service projects became a graduation requirement for students. “No matter what area or field God has called you into,” Graham believes, “you can find ways to serve others.” 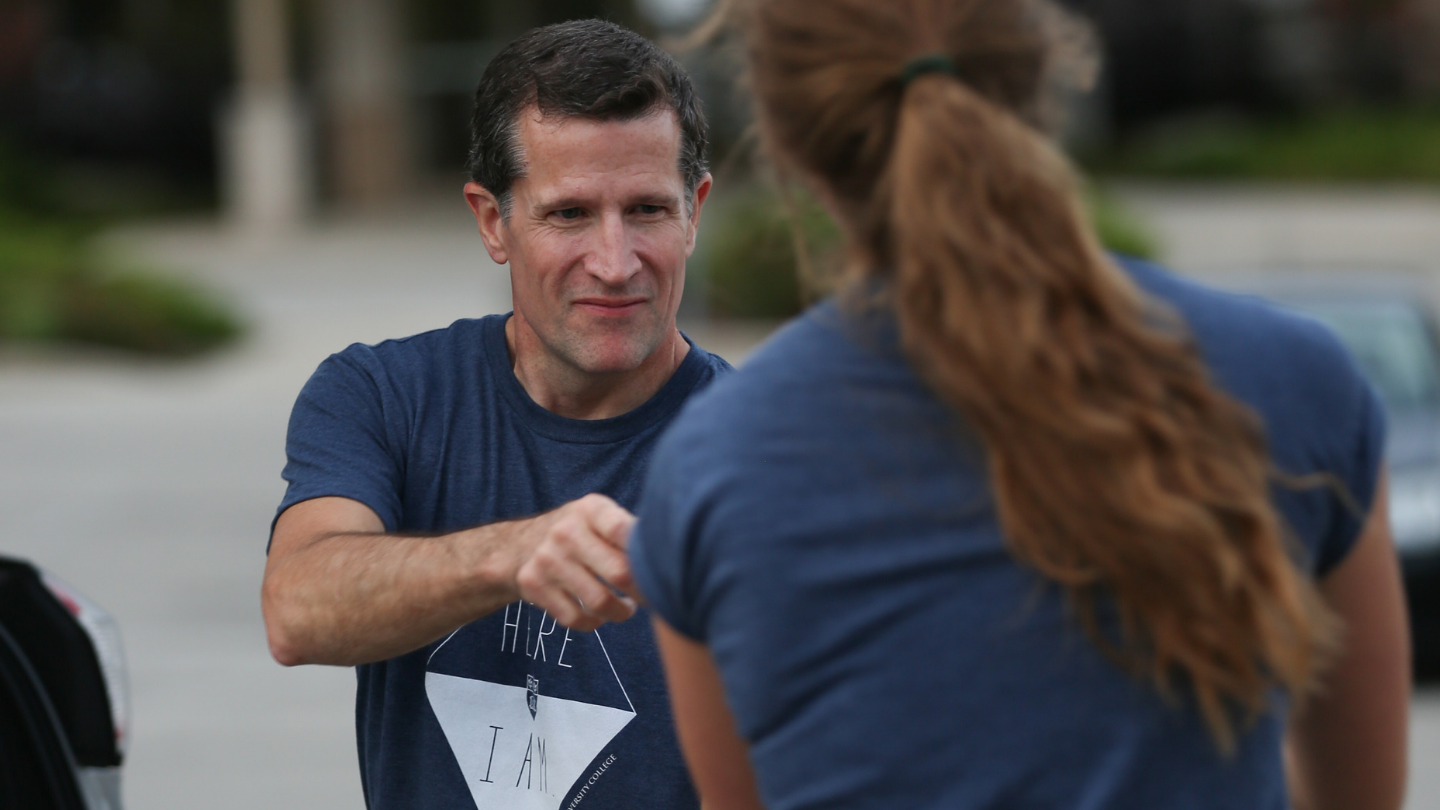 Though he was initially reluctant to take on administrative roles at Lee University, he soon discovered that he found “joy from empowering other faculty members” as the chair of the social sciences department. He transitioned from teaching to more administrative roles at other Christian post-secondary schools before coming to live in Canada for the first time as Redeemer’s president.

Dr. Graham chose his words about the differences between Canada and the United States carefully, while holding a Tim Hortons coffee cup. Since he has Canadian family, he has been to Canada before. He can pick out a Canadian accent. He admits that “sometimes, folks can think the world revolves around the United States — but it doesn’t.”

When he isn’t in meetings, Dr. Graham enjoys playing bass guitar and running. He played sports such as soccer, wrestling and baseball in high school but didn’t start running until he was in his forties. Before that, he “had never run much other than when forced.” He trained for a 5K fundraiser and, a few years later, found himself running a marathon. Though he no longer has time to train for such long races, he continues to run five and 10 kilometre races.

For now, Dr. Graham’s focus is getting to know Redeemer. For this reason, he is living in an apartment on campus. This term, the President’s Guest House is being used for other previously booked events. In the future, the guest house will be updated by Redeemer facilities staff and leased to Dr. Graham and his wife Cheryl. The Grahams hope to get to know staff, faculty and students by living right on campus.

Graham’s years of experience in Christian schools equipped him to give advice about living in a Christian campus community. He took the challenge right back to the gospel. “We do not have within us the ability to be good enough for salvation,” he reflected. “[Humility is] being able to think charitably and extend grace. There are times when we’re not having a good day. We would hope for grace, [for others] to continue to love and care for us and we owe it to others to do the same.”

He also acknowledges the growing challenge of Christian post-secondary education, particularly in terms of cost. “Continuing to be faithful to our identity while keeping it affordable is a challenge,” he said. It’s a struggle that he considers worthwhile. “Through my experience, I came to understand the notion of God calling us into all realms of human endeavour. In all of those realms, he can use us,” he continued. “We need Christians in every field. Salt can’t stay in the salt shaker.”

Anna Bailey '21 is a reporter for The Crown, Redeemer's student newspaper.