Current Issue
Sections
Archive Subscribe
Students
Strumming Through the Dark: Music, Faith and a Global Pandemic
In the wake of COVID-19, Redeemer's music department shares stories of grief, resilience and the healing power of a hymn.
8 min. read
Amelia Bowes
2020

Whether we’re aware of it or not, music is an ever-present and even necessary part of our lives. Yes, necessary. Simply hearing the opening notes or beat of a song on the radio can prompt memories of the past or inspire us for the future. As Redeemer’s music students know, it can also be a much-needed reminder of God’s presence during the darkest of times. For three music students, in particular, this became a sudden reality when their senior recitals, the culmination of years of hard work and a triumphant end to their degrees, were cancelled due to the COVID-19 pandemic.

“The recital was everything I was pointing towards for the full four years,” says fourth-year music student Calvin Hutten. “Especially in the past two years, it was constantly in the back of my mind. I wrote a lot of music, got together an incredible band of musicians who I look up to, and spent hours writing charts, making demos and tweaking the setlist. I also designed programs, hung up posters and did some really cool rehearsals. Then, it was completely cancelled one week out on very short notice. That was pretty crazy,  one of those ‘who-would-have-thought?’ moments. 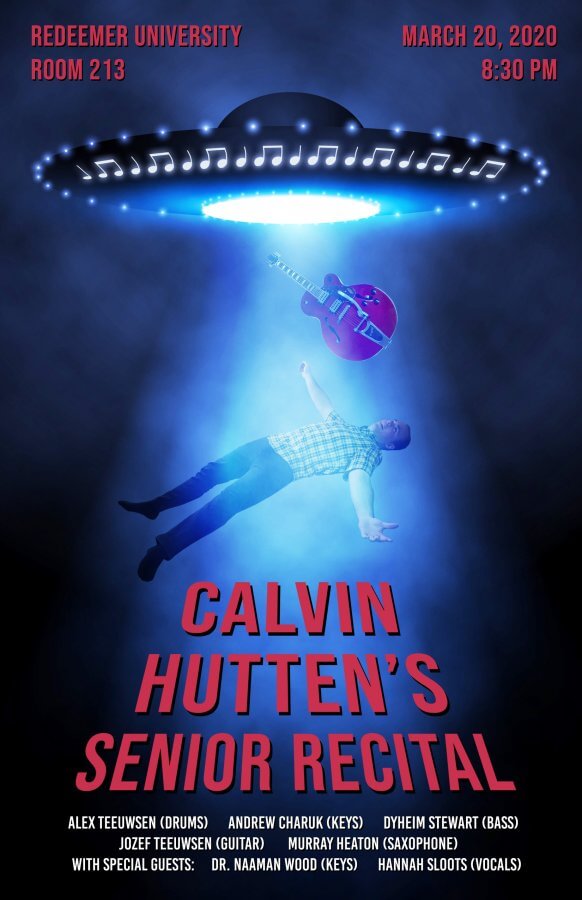 Hutten’s focus is the electric guitar, which he’s played since a friend first introduced him to it five years ago. However, music was a part of his life long before then.

“I’ve grown up with music all my life, and I’ve taken piano lessons since I was seven years old,” he says. “I grew up in a musical family, so pursuing it as my post-secondary education wasn’t really a debate as much as the logical next step.”

Shortly after starting university, he expanded his interests to jazz, funk and fusion. Along with the integrated Christian perspective, what attracted him to Redeemer was the calibre of the music faculty and the small class sizes.

“Despite its size, Redeemer’s music department has really great professors and instructors for private lessons. Smaller class sizes are also really important for learning more difficult subjects such as music theory. Being able to spend one-on-one time with the professor is really helpful, and you don’t feel like you’re holding everyone up if you need to ask a simple question in class.”

Student Rachel Don, a fourth-year violinist, also had no question that she would study music. When it came time to look at universities, the foundational Christian worldview was her deciding factor in choosing Redeemer.

“Christian education is really valuable to me, and I knew that I would have mentors and teachers who would model how to integrate my faith with my music.”

Like Hutten, Don also put countless hours of thought and practice into her senior recital. For her, part of dealing with its cancellation is acknowledging that, like with any other loss, she’s allowed to grieve.

“I’ve definitely had to acknowledge the grief that’s come along with this crisis. The senior recital was something that I’d looked forward to since I got accepted into Redeemer, and I feel as if I practised for it throughout most of my time there. I also envisioned it as a way that I could give back to and thank my professors for all they’ve done.” 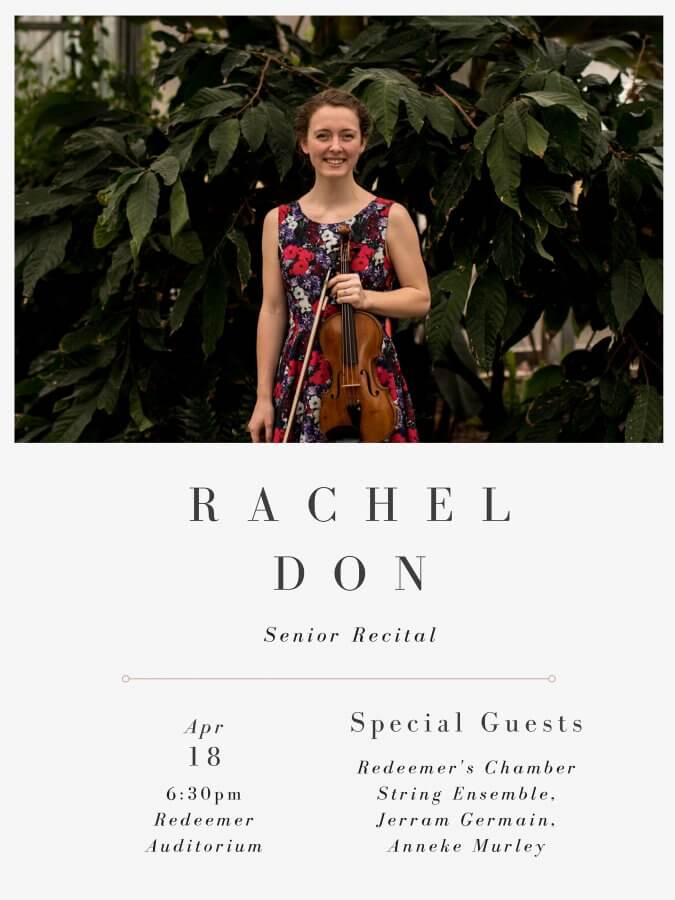 Bennet Soenen, another senior music student who plays classical and electric guitar, appreciates that his classes always managed to align his faith and education with scriptural interpretation through song. In the wake of COVID-19, he finds himself struggling with the fact that left unperformed, his recital music can’t be truly appreciated.

“For someone like a psychology major, they’ll have all their research and write-ups even if they don’t get to present their thesis in person. For a music major, the whole point of doing this is to perform it. There’s no other culmination.”

Along with the senior recitals, Redeemer’s annual spring concert, which would’ve included performances from the concert choir, instrumental ensemble, jazz ensemble and the alumni jazz band, was also cancelled. Although not all choir and band members are pursuing music academically, it still plays a significant role in many students’ educational experience. Even those who simply listen to music performed by others.

“As musicians, there’s a whole lot of practice for a little bit of performance,” says second-year biochemistry student and choir member Aaron Lantz. “When you’re unable to perform, you lose  sharing that experience with other people.”

“There’s something about getting to really perfect the music, make it excellent and then share it,” echoes Carina Wolfert, a first-year choir member and math student. “I’m grateful we had our choir tour earlier this year over reading week, but we still weren’t able to fully complete things. It happened so fast that we didn’t know our final rehearsal was actually going to be the last one.”

Although these pangs of futility and frustration are understandable, this is definitely not where the journey has to end. As is evident in the rehearsal video below, Hutten takes comfort in the fact that spending the last two years preparing for his recital gave him the opportunity to grow tremendously as a musician while building incredible relationships.

“When you have a really big project to work towards, you’re going to try and learn everything you can beforehand,” he says. “I learned a lot about being a bandleader and a better guitar player. I gained a lot of advice from other experienced musicians, wrote music that I’m proud of and still have the charts and demos ready to go if there’s a future gig up the road. I’ve also been thinking about how music-making is only half about the music. The other half is about the people you meet along the way. For me, this is the biggest win of all because I got to form new friendships, deepen old ones and play with musicians who I really look up to. Even though the recital never happened, there was still a lot that I got out of it.”

“I got to form new friendships, deepen old ones and play with musicians who I really look up to. Even though the recital never happened, there was still a lot that I got out of it.”

Don is also holding on to her compositions, Throughout her preparations, she rehearsed a combination of pieces that allowed her to expand her skills and draw on the talents of other Redeemer musicians.

“I had a couple of pieces that I was going to play with a pianist and the string ensemble. One of them is a Jewish piece called Kol Nidrei by Bruch, which I was really excited to perform because it’s really deep and moving. I’d also been working hard with another musician on a duet between violin and viola. That was definitely a little bit beyond our skill level, but we were both pretty determined and excited to learn because we just thought it was the coolest piece.”

Above all, what helps these students stay hopeful and tethered to their faith is remembering that one of music’s ultimate joys is the solace it brings in times of struggle. For Hutten and Don, this became especially apparent when revisiting some of their previously rehearsed pieces.

“At the beginning of Kol Nidrei, the violin is almost making sobbing sounds,” says Don. “It’s a beautiful piece, but really sad. The circumstances definitely made it easier for me to enter into that, and it actually felt like one of the best times I played it. When you’re going through something like this, there’s almost more depth you can bring to a piece that wasn’t there before.”

“When you’re going through something like this, there’s almost more depth you can bring to a piece that wasn’t there before.”

“One of the arrangements I prepared for my recital was a simple hymn titled Take it to the Lord in Prayer,” says Hutten. “As I was preparing, I didn’t really think too much about it. Then, when everything got cancelled all of a sudden, I was struck by how important the words are at this time in history. The rest of my setlist was mostly made up of complex jazz fusion tunes with tons of chords and strange rhythms. Sometimes though, a very simple song hits so much harder, especially in difficult circumstances. For me, music is absolutely essential, and a blessing from God, for getting through these strange times.”