Few artists are comfortable taking a knife to their paintings. It seems counterintuitive to spend countless hours cooped up in a studio creating intricate images only to splice, flay and cut them open. But, to Phil Irish, professor of art at Redeemer University and prodigious painter, this method of creating artwork is — in his words — freeing.

Irish’s creative process incorporates what he calls a “collage way of working,” a unique methodology with several phases. He begins by painting with intuition, unconstrained to a specific style. One moment it’s a romantic or sublime mode, the next an abstract geometric mode or perhaps something richly observational or descriptive. Once the painting is done, the process transitions drastically. It goes — quite literally — under the knife. 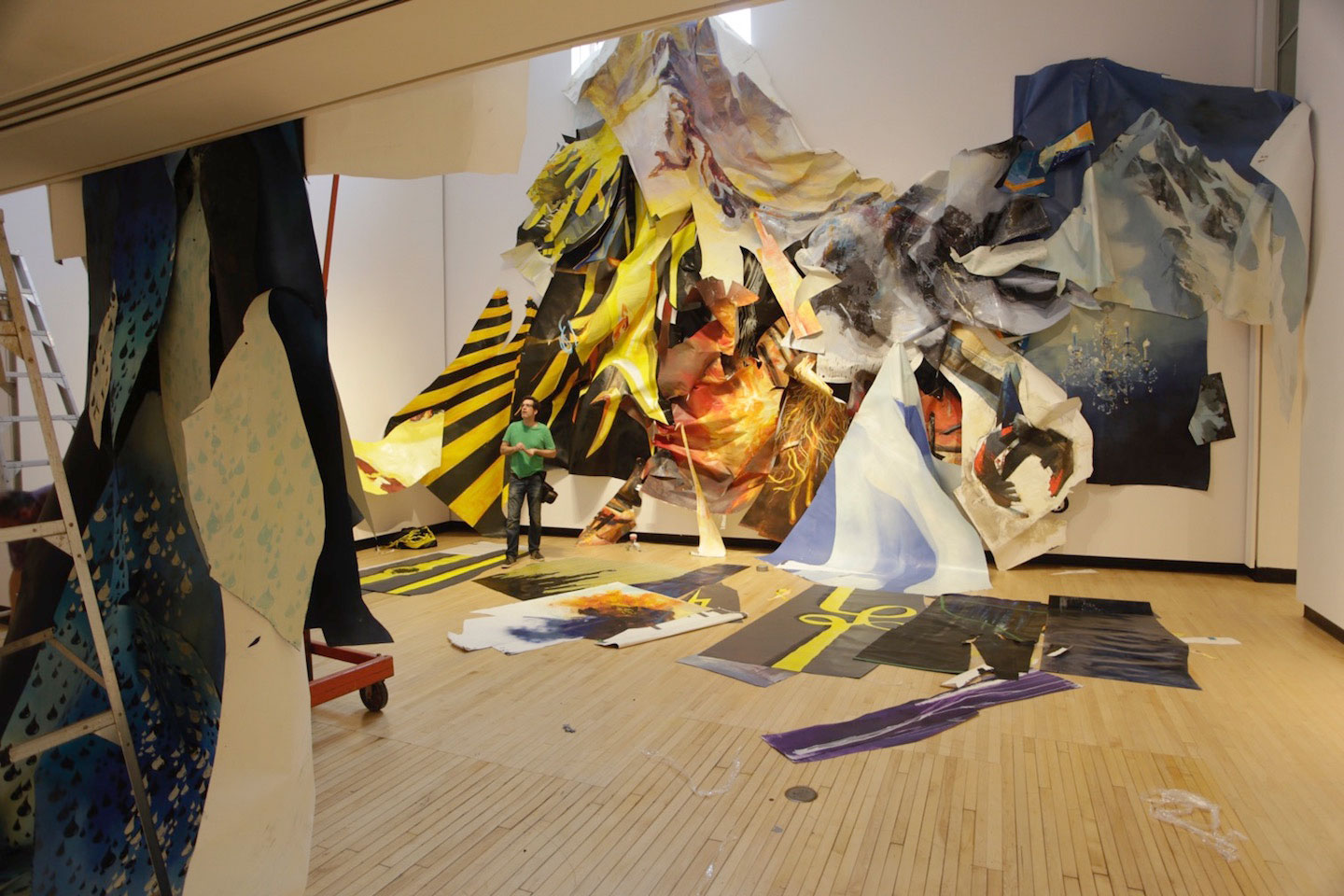 “Once I have a substantial amount of source painting to work with, I begin the collaging,” says Irish. “This can be painful — cutting into an image that already has a kind of resolution and authority to it. It is also exhilarating, thrilling, because there is potential. There’s also no turning back.”

Looking at once haphazard and meticulously organized, Irish’s artwork has steadily evolved over his career. Now, three years after completing a six-week residency at the Banff Centre for Arts and Creativity, this work has culminated in an expansive solo exhibition on display at the Art Gallery of Guelph — mount pile.

Irish began his hour-long artist talk at the Art Gallery of Guelph on mount pile by describing the journey behind the artwork. This exhibition has its roots in Irish’s earlier work, which focused on mapping, cartography and natural landscapes. During the completion of his MFA degree at York University, he began his collaging process and made his first architecturally scaled works. Subsequently, a Kickstarter campaign, entitled “Trashing Mountains”, began with the intent to fund a six-week residency at the Banff Centre for Arts and Creativity. The structure of the campaign allowed for backers to receive some form of artwork from Irish in return for their donation. The six weeks spent in Banff in 2014 have since fuelled Irish’s work for the three years that have followed.

“I am playing the steadiness of the mountain — geological time, or maybe the kairos time of God’s perspective — against the frantic and consumptive pacing of our society.”

The residency was thematic, meaning that Irish was surrounded by a diverse group of artists from Australia, New York state and across Canada who were, in some way or another, interested in similar issues and questions. The overarching theme — “re:Making” — connected the group on the ideas of reusing found elements, of taking the old and making it new and challenging people on how they view the world. In Irish’s case, the issues, questions and ideas stemmed from two different locations: the Rocky Mountains and the oil sands north of Banff — otherwise known as the Athabasca Deposit. 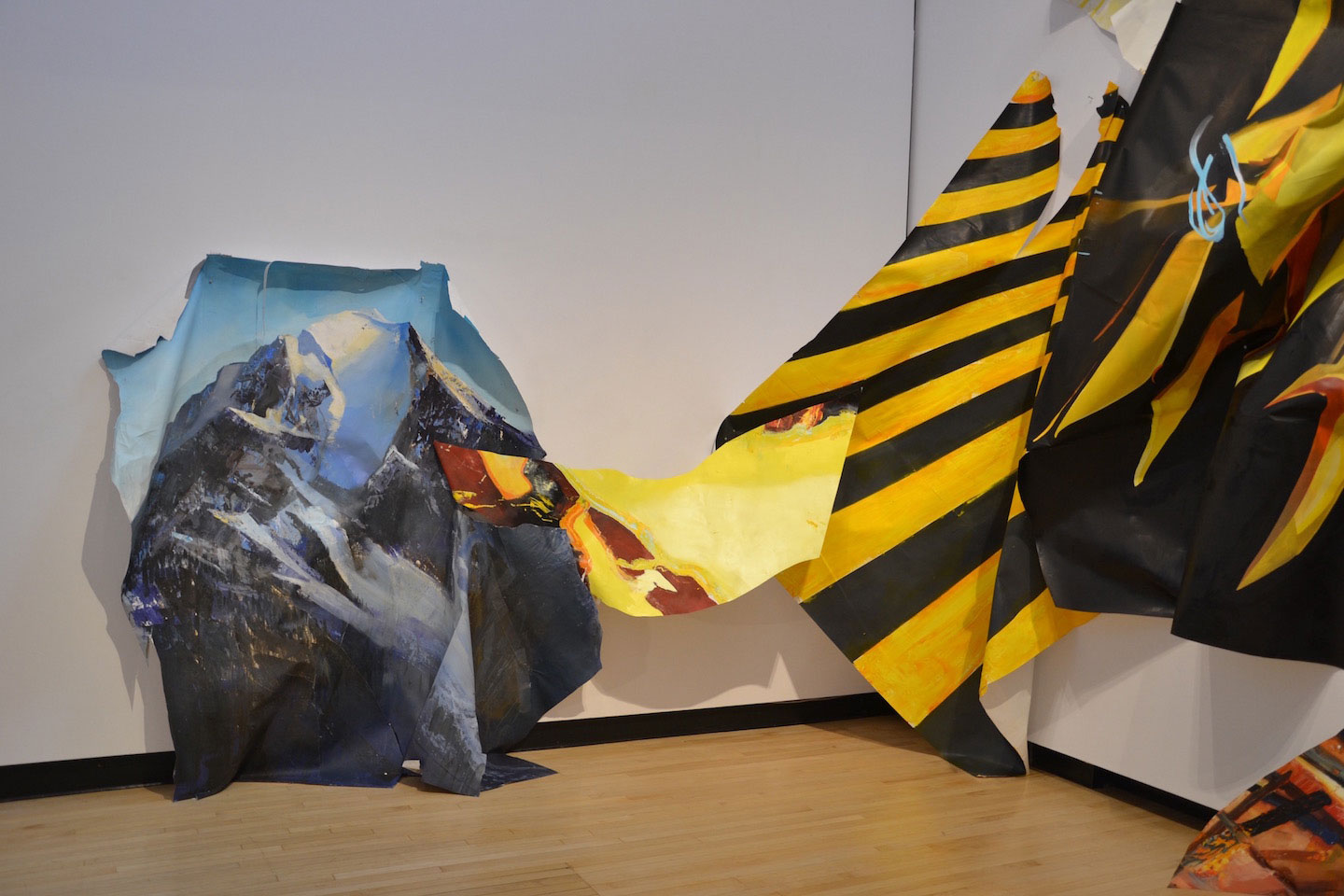 He flew north to Fort McMurray to tour the oil sands. The goal was to learn about the technological processes and regulatory frameworks related to the extraction of crude oil there. Extending from this goal was a desire to investigate how fossil fuel derivation impacts the environment and Indigenous peoples. These topics directly feed into mount pile, offering the viewer glimpses of fascinating and compelling subject matter. “The contrast between the elevated realm of ice and the oily grit of the pit is central to this work,” explains Phil. “I am playing the steadiness of the mountain — geological time, or maybe the kairos time of God’s perspective — against the frantic and consumptive pacing of our society.”

Intriguingly titled, mount pile is a near perfect descriptor for Irish’s artwork. At one moment, the artwork appears monumental, with a double-sided sculptural collage and a colossal two-storey piece that climbs fifty feet up the wall, as if stretching towards the gallery’s clerestory window. Yet, from a different angle, the art reminds the viewer of ordinariness, of a certain nostalgia for the more mundane moments in life. A chandelier hangs beneath a mountain. Rainbows, lightning bolts and rain drops abound. The familiar yellow and black colour schemes of construction sites are everywhere, reminiscent of long hours spent in gridlock traffic.

“The world is so saturated with meaning; I am trying to be observant, sensitive and attuned.”

To create these staggering, life-size collages, Irish’s methodology reaches full force in a painstaking deconstruction process. Like a surgeon, Irish cuts apart his work with an arsenal of tools and then sews and binds what remains together, attempting to organize chaos. It’s a visceral undertaking, a literal ripping apart of paintings in order to reconstruct them in new ways.

“I am thematically hungry,” says Irish when asked to explain his process. “The world is so saturated with meaning; I am trying to be observant, sensitive and attuned. There is a sketchbook practice that is often the starting point. There is a prayerfulness to this looking, listening, being alive to what the Spirit might be saying.” 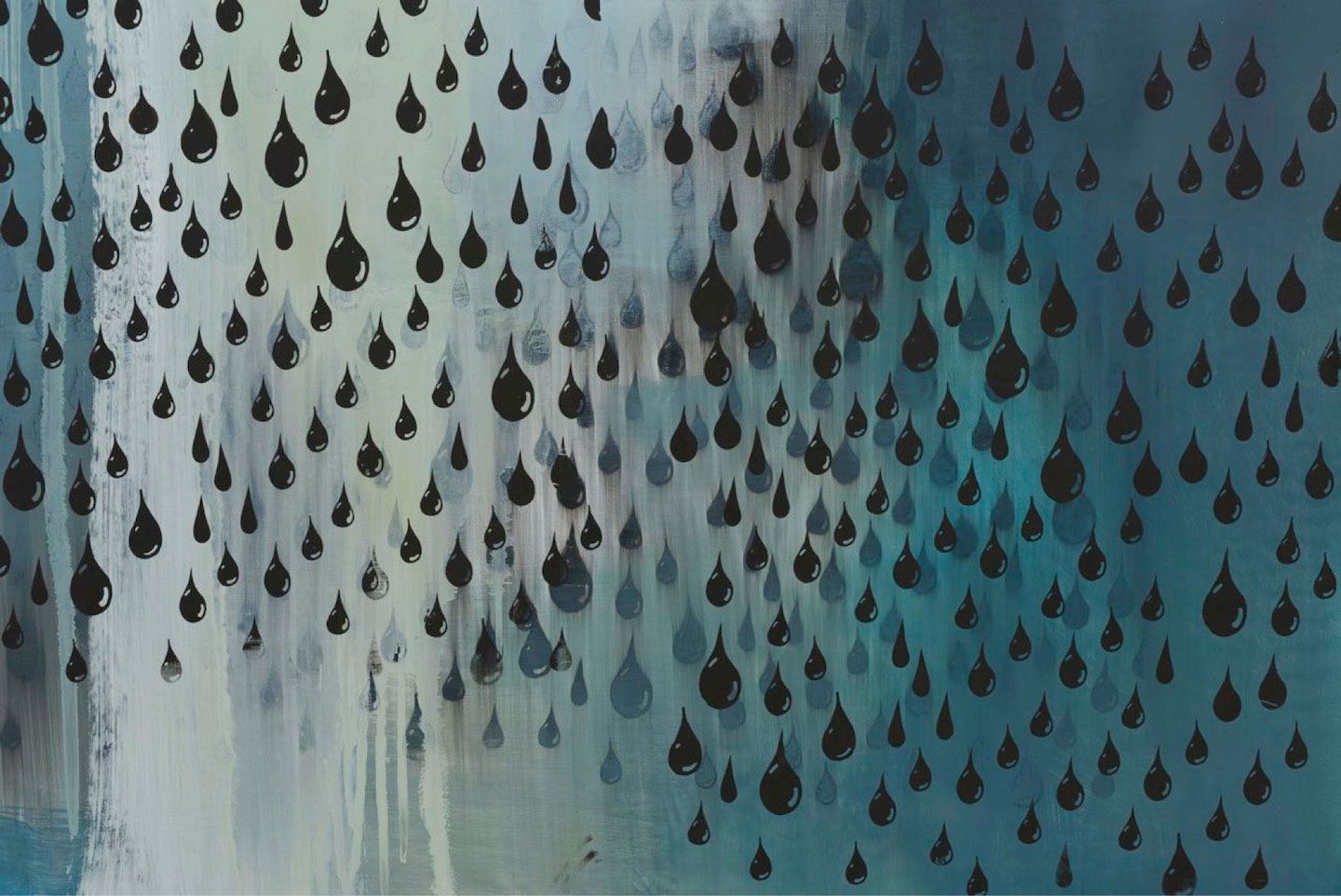 There are motifs that appear throughout the exhibition. Rain drops and oil drops are juxtaposed. Glaciers and the icy peaks of mountains rapidly melt. A bright red sports car tumbles through the frosty scenery, giving way to fiery tailing ponds. Regardless of how abstract and unstructured the collages appear, there is an ultimate structure in place, though it is an organic structure that grows as Irish works.

The fluidity of the artwork is not accidental, but a means of truth telling. “I find this method powerful because it is honest about fragmentation and brokenness,” explains Irish. “I began working in this way when my personal life was in some upheaval — I was questioning decisions, my life’s path, how to organize my family life. Our world is also in upheaval. We are disrupted by technologies, environmental degradation and shifts in faith perspectives in our churches.” 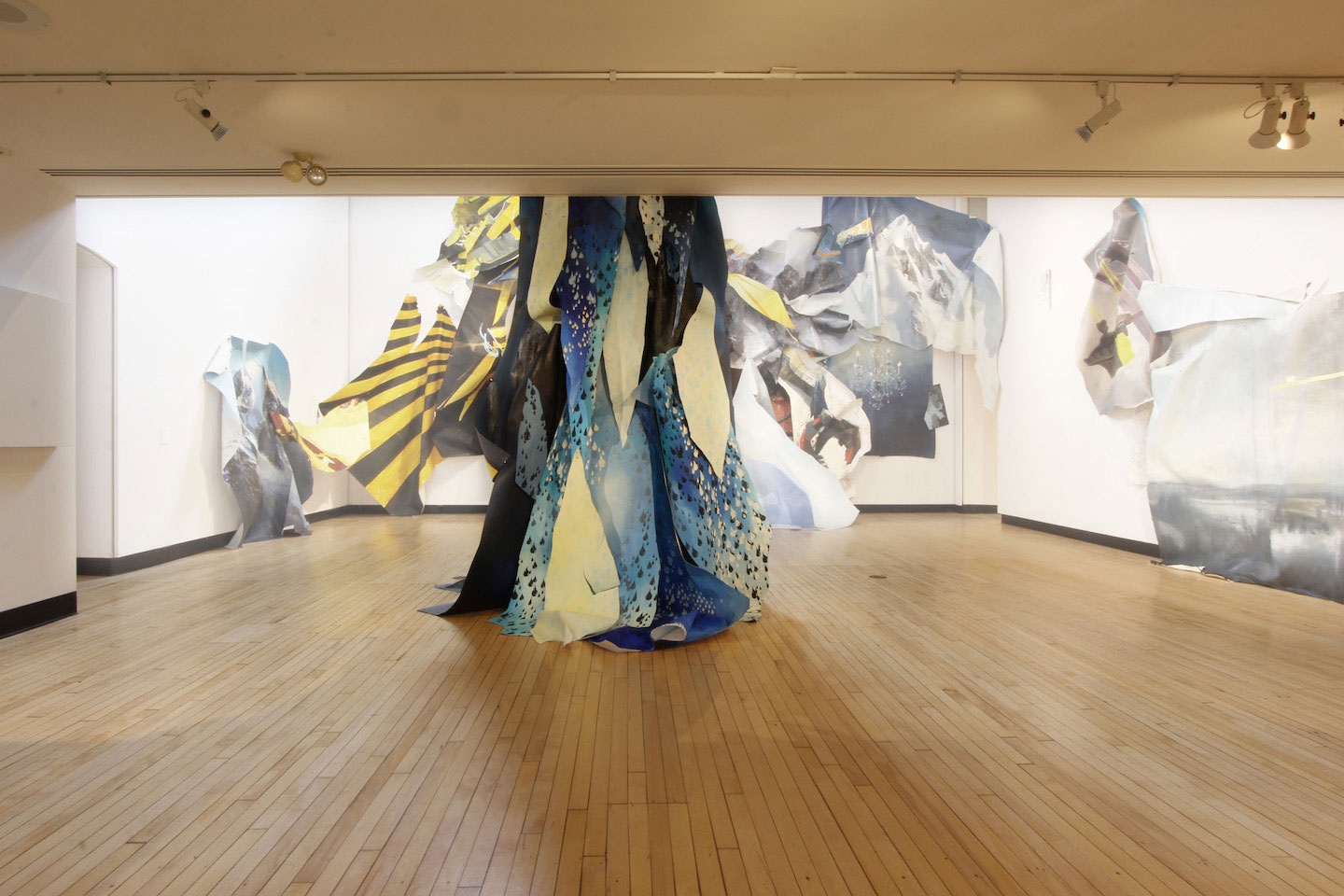 But Irish’s work also embodies the generativity Christianity offers. “What new thing is God doing?” Irish asks. “How do we not be ‘precious’ about what we have had, but rather find a prophetic possibility to lean into a more whole future? My paintings, I hope, have this tension between great beauty and the unsettling violence of being reconfigured.”

Perhaps the fluidity and dynamism of the art is meant to reflect the tension of the Kingdom of God that has arrived but has yet to come. Irish is not proposing a final answer. Instead, he offers provision for reflection on the current state of affairs. There is excitement in the moment, but the paintings ask the viewer how they — or the world — might change.

mount pile will be exhibited at the Art Gallery of Guelph until August 13, 2017.