The Subversive Evangelical: The Ironic Charisma of an Irreligious Church, published by McGill-Queens (2019), is Dr. Peter Schuurman’s in-depth look at megachurch The Meeting House (TMH) and its leader Bruxy Cavey. Schuurman first completed a sociological analysis for his PhD in Religious Studies from the University of Waterloo by getting up close and personal with the church, its leader and many of its more than 5,000 attendees.

His interviews revealed that 98 per cent of attendees were attracted to the church, not for its denominational affiliation, but by teaching pastor Cavey. But Schuurman argues that it is more than just Cavey’s charismatic personality that continues to attract impressive numbers on Sunday mornings. He says a “dramatic web” has been woven and captures the attention and imagination of the TMH participant.

“Church is a dramatic performance that attracts people to its story, and we get caught up in the action,” says Schuurman. “Dramatic web is my way of describing the cultural substance of charisma. I say ‘dramatic’ because religion is dramatic, ritualized, performative, not just beliefs. Church includes teamwork, production, technology; it shows a cultural, aesthetic angle that can include economic aspects without reductionism. It emphasizes story and script acted out and improvised for life; and they meet in movie theatres! I add ‘web’ because it’s sticky, fragile, invisible and constantly being re-spun.” 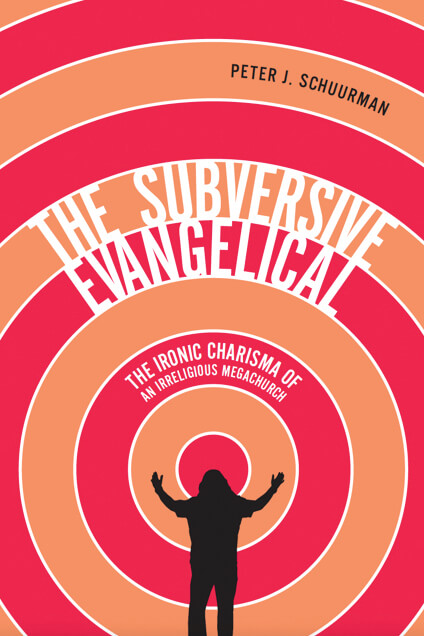 In his world religions class at Redeemer, Schuurman explores not only the serious side of religions, but also the comic and humorous side. He feels it is something often overlooked by scholars and seen to be superficial or secularized. Schuurman, in his thesis, admits that while some degree of strictness is necessary for churches to thrive and grow, religion also thrives when it is celebratory, silly, romantic or satirical. And TMH is all of those things.

Paradoxically self-dubbed “the church for people who aren’t into church,” TMH features satirical sermons based on pop culture references. It pokes fun at traditions that can veer towards legalism. This all seems to be part of the appeal, like the ironic tattoo on Cavey’s inner left arm that reads “Leviticus 19:28.” If this is not a verse you’ve committed to memory, it forbids cuts and tattoos to the body. It is exactly this kind of playfulness Schuurman believes is giving those he calls “reflexive evangelicals” the opportunity to feel a part of a church that critiques its own tradition and is intentionally irreligious.

“The stereotype of the angry, judgmental, right-wing Moral Majority has spoiled the image of evangelicals in a liberal post-Christian dominant culture,” Schuurman states. TMH is offering an experience that provides some cultural legitimacy to the stigmatized Canadian Christian.

Schuurman hopes that by publishing his book with a secular publisher for a secular audience, he will help his students see that even in the secular study of religion, Christian scholars can contribute a voice that takes faith seriously rather than dismissively.

Academics
Charting the Way of Compassion
Dr. Aaron Smith, assistant professor of social work and director of field education, talks about the principles that guide him in his work at Redeemer.
Amelia Foster
Academics
The Road to Research Grants at Redeemer
Resound looks back at the history of successful federal research grant holders at Redeemer.
Shannon McBride
Academics
Where is Jesus?
Dr. KJ Drake set out to explore the historical debate of the nature of Jesus in his recently published book.
Shannon McBride